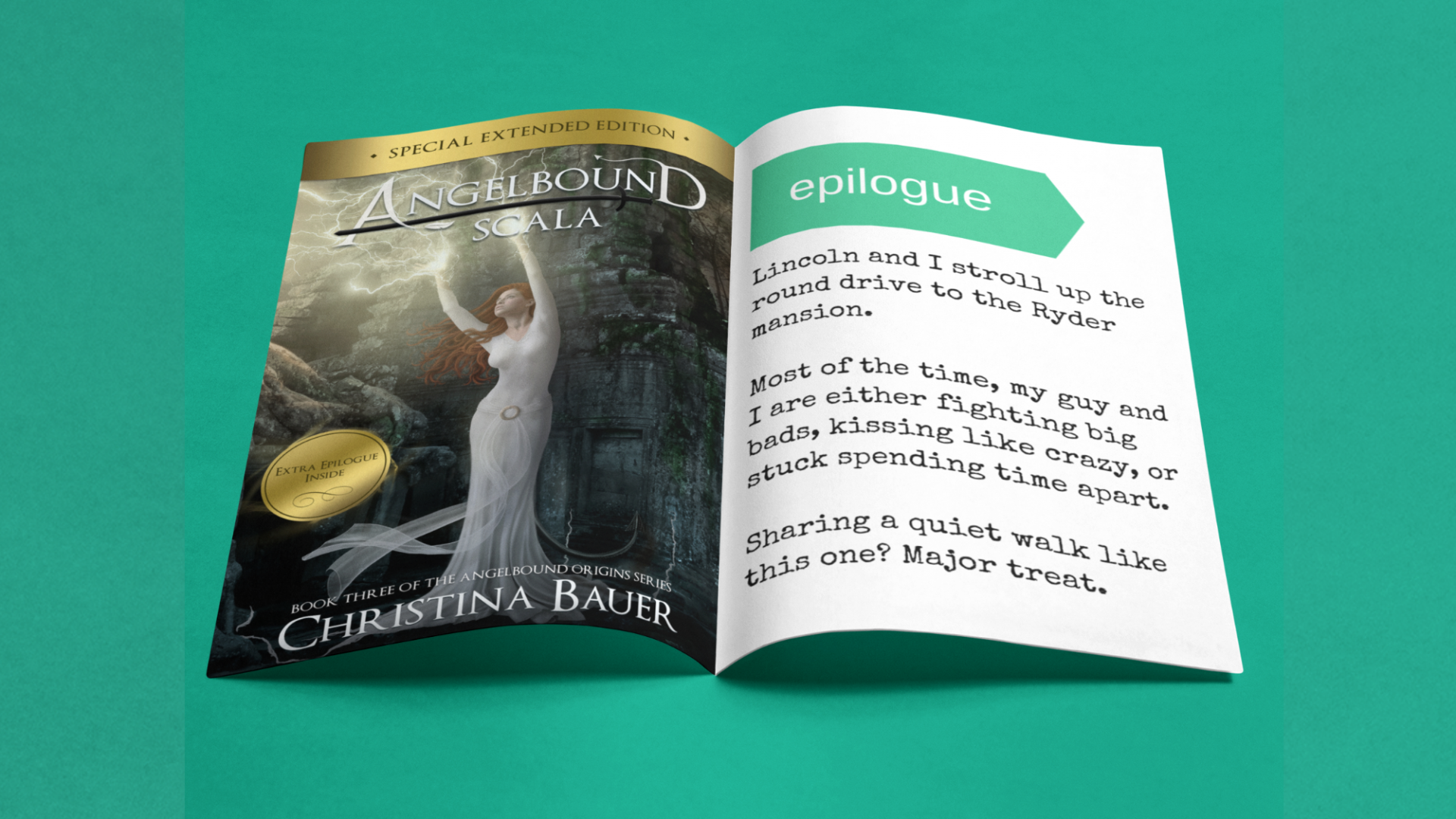 The data elves hath decreed some of my books need new back-end tracking numbers and thusly, I must deactivate the original SCALA and release a new version instead. Upon hearing this news, I decided to add a new epilogue to the book, because that’s how I roll.

Long story short, check out this epilogue preview from the special edition of SCALA. The new title releases in early May. I hope you enjoy the sample!

Lincoln and I stroll up the round drive to the Ryder mansion. Most of the time, my guy and I are either fighting big bads, kissing like crazy, or stuck spending time apart. Sharing a quiet walk like this one? Major treat.

I soak in the moment.

We pause before the front door. Normally, my guy and I would be mobbed by now, mostly from quasis who want me to bless their goldfish or something. But it’s early a.m. and the mansion grounds are deserted. I give my guy the once-over, simply because I can. Lincoln’s in casual mode today, meaning he sports a black t-shirt, jeans and hefty boots. Meanwhile, I wear my white Scala robes and carry a leather satchel.

Key fact: Time was, you could never get decent handbags in Purgatory. Then I kicked the ghouls out and local shopping got crazy-better. Total victory bonus.

I ring the doorbell. Recently, the Ryders installed a fancy number that bongs to the tune of Some Enchanted Evening. It’s an odd choice, but the Ryders are all part lust demon. To them, using a hookup song as a doorbell makes sense. Seconds pass before a muffled voice sounds behind the wooden panel.

Lincoln gives me the side-eye. “Is that … Zeke?”

Here’s the deal. Cissy promised Zeke wouldn’t be around this morning. Sure, Lincoln is my fiancée, but it’s not like we’ve known each other for years. Plus, there’s already plenty of weirdness in my life: I’m a demi-goddess, Dad’s an archangel, and Mom’s President of Purgatory. And that list doesn’t even leave my immediate family. I’m in no rush to introduce my guy into my larger circle of strangeness.

“Answer my question. Who goes there? I’m the Captain of the President’s Guard.”

Which is true. That said, Mom will probably give Zeke the gig. Two reasons. First, Zeke stood by my mother when she faced Armageddon. Loyalty like that gets rewarded. Second, my bestie Cissy is killing it in the diplomacy department. That’s a huge help to the government in general, and to my mother in particular. There’s a catch, though. Cissy’s dating Zeke, who wants in on the military. Hence the guard thing.

I jingle the handle. “Open the door. We’re late for Cissy.”

“I need proof of identity,” states Zeke. “Give me the password.”

“Are you serious?” I throw up my hands. “No one told me you were guarding the door, let alone asking for passwords.”

Beside me, Lincoln toys with the hilt of his baculum. “Shall I ignite my long sword?” His eyes light up with a sly gleam. “It would slice through this wood like butter.”

“I heard that!” calls Zeke. “You didn’t say anyone was with you, Myla.”

I look to Lincoln. “Please don’t ruin the door. Zeke’s mom will call my mother in a nanosecond. Nothing but hideousness will result, trust me.” I jiggle the handle harder while yelling at the door. “Listen to yourself, Captain Man Candy! You just called me Myla. You know who I am. And I distinctly used the word ‘we’ when I said—and I quote—we’re late for Cissy. So obviously, someone’s with me. Now open up already.”

A drumroll of footsteps sounds from inside the house. At last, the door swings open. Inside the threshold, there stands Zeke in full purple body armor, complete with the crest of Purgatory’s New Republic on his bicep. Beside him stands a very red-faced Cissy in a purple skirt suit. She’s panting. No doubt, my bestie sprinted to the door.

“I’m so sorry,” says Cissy. To emphasize her worry, she wrings her hands. On anyone else, that move would look totally fake, but my bestie sells it like a pro. That’s why she’s so good at the diplomacy thing.

“It’s fine,” I say. And it is. Cissy’s working her ass off these days. So sweet of her to come by early just so Lincoln and I can bypass my worshippers. Sure, Walker gives my followers little projects to stay out of my hair, but Purgatory’s a massive place. There’s always someone who doesn’t get the memo, if you know what I mean.

“Hey, Lincoln.” Cissy turn to Zeke and freezes. She looks him over from head to toe. Twice. It’s as if she’s seeing her boyfriend for the first time this morning. Which is probably the case.

Zeke puffs out his chest. “It just came in. Official guard armor. Thought I’d try it on and practice, you know?”

I raise my hand. “Zeke was being totally annoying at the door. For the record, there’s no password system here.”

Cissy and Zeke ignore me because that’s what they do sometimes. Zeke arches his right brow. It’s what Cissy calls his ‘delicious’ look. He then gestures across his body armor. “So, what do you think?”

A long pause follows while Cissy says nothing. My bestie is like me in one respect. Both of us love ourselves a man in body armor. Cissy has dropped all pretense of hand-wringing and has segued completely into guy-ogling.

My bestie doesn’t even look in my direction. “Hmm?”

“We’re supposed to meet that Hanner guy,” I remind her.

Cissy stays in eye-lock with Zeke. “His name’s Herbie.”

“Right.” I make twiddle fingers at her and Zeke. “So the first step in the process is for the two of you to move backward so Lincoln and I can enter the mansion.”

Together, Cissy and Zeke retreat into the reception area. Then they start ogling each other some more. Zeke’s eyes flare red. That means his lust demon is active.

There are some memories that are so disturbing, I’d like to burn them out of my brain. Many of them involve Cissy and Zeke making out. They’re just sloppy. Even thinking about it makes me shiver. Next my tail gets into the act. It arches over my shoulder to point at my face. The arrowhead end the wags from side to side, meaning no, no, no.

Grasping Lincoln’s wrist, I yank him into the building, through reception and then straight down the hallway leading to the diplomatic wing. As we speed away, I call over my shoulder. “I know where, uh,” what’s that name again? It’s too stressful right now to remember, so I take a wild guess. “I can find Hanford on my own so … buh-bye!”

Lincoln narrows his eyes into what I call his contemplative face. This happens a lot when he asks me questions about quasi life. “I thought you were part lust demon.”

Suddenly I realize how I’ve lost some cool factor here. The Cissy-Zeke thing freaked me out. Releasing my vise-like grasp on Lincoln’s wrist, I force a more leisurely sashay-style pace down the hallway. “What do you mean?” I ask, very casually and with the utmost level of cool possible. Maybe.

“Cissy and Zeke are about to kiss.”

“And there’s my question. Why would that be upsetting?”

Stopping, I fix Lincoln with my most serious stare. “Two words: spit strings.” I hold up my palms so they’re about three feet apart. “Of like, epic proportions.” Okay, that was six words, but hopefully my guy will get the idea.

And does he ever.

Lincoln’s face contorts into a look that can only be described as, disgusted. Little lines form between his eyebrows and everything. “You are a goddess among women,” he states solemnly. “Thank you for sparing me that sight.”

At this point, it’s worth noting that Lincoln did not even wince when we exploded Simia demons the other week. There were blue guts in our hair and everything. Therefore I find his reaction to the spit string situation to be totally validating.

My guy and the names. He’s a wizard when it comes to memory. Which is one of many reasons why I’m glad Lincoln’s here today. My eyes widen. In all the excitement between Zeke and Cissy, I’ve gotten distracted from the real purpose of our visit.

Getting evidence against Acca.

Then using said facts to lock Aldred up in his forever-jail.

Watch for announcements on the new extended edition of SCALA in early May!