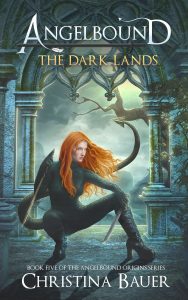 
Nineteen-year-old Myla Lewis is loving life–she’s now a wife, mother, and Queen of the Thrax. Oh yeah, and being a super-powerful demigoddess who moves souls into Heaven or Hell doesn’t suck, either. In fact, everything is pretty much awesome. Until something craptastic happens.

Her honorary older brother Walker enters the Dark Lands, home to the rule-loving ghouls, and vanishes without a trace.

Now it’s up to Myla to solve the mystery of Walker’s disappearance. Of course, Myla likes interacting with ghouls about as much as elective dental surgery. To make matters harder, everyone thinks that Walker is simply taking a well-deserved vacation. But Myla and her Angelbound love, Lincoln, both suspect that a new criminal called the Viper took Walker in order to release Lucifer, the ex-King of the Angels and bloodthirsty killer.

Long story short, Myla and Lincoln have only twenty four hours to rescue their good friend and stop Lucifer from taking over the after-realms. Even for them, this may be a too-tall order, especially when Lucifer’s mysterious past with Myla’s father threatens the very future of the after-realms.