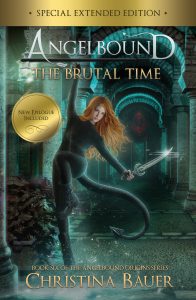 As the Great Scala, Myla Lewis is the only being who can move Purgatory’s souls to Heaven or Hell. It’s a big job. Too bad Myla goes through assistants faster than a hot knife through brownies. Not that it bothers her much; Myla’s always been a solo fighter.

Then comes the problem of the fading angels. Millions of Heavenly residents are dying. According to a prophecy, the only way Myla can save them is by traveling back in time, meeting King Arthur, and creating her own knights of the round table. The catch? Doing so might end the after-realms in a bloody demonpocalypse.

Myla and her main squeeze, Lincoln, aren’t afraid of taking a few chances (in between kisses). But this time the stakes may be too high, even for them. And the biggest challenge of all? Finding those knights.

Because Myla Lewis doesn’t play well with others. At all.