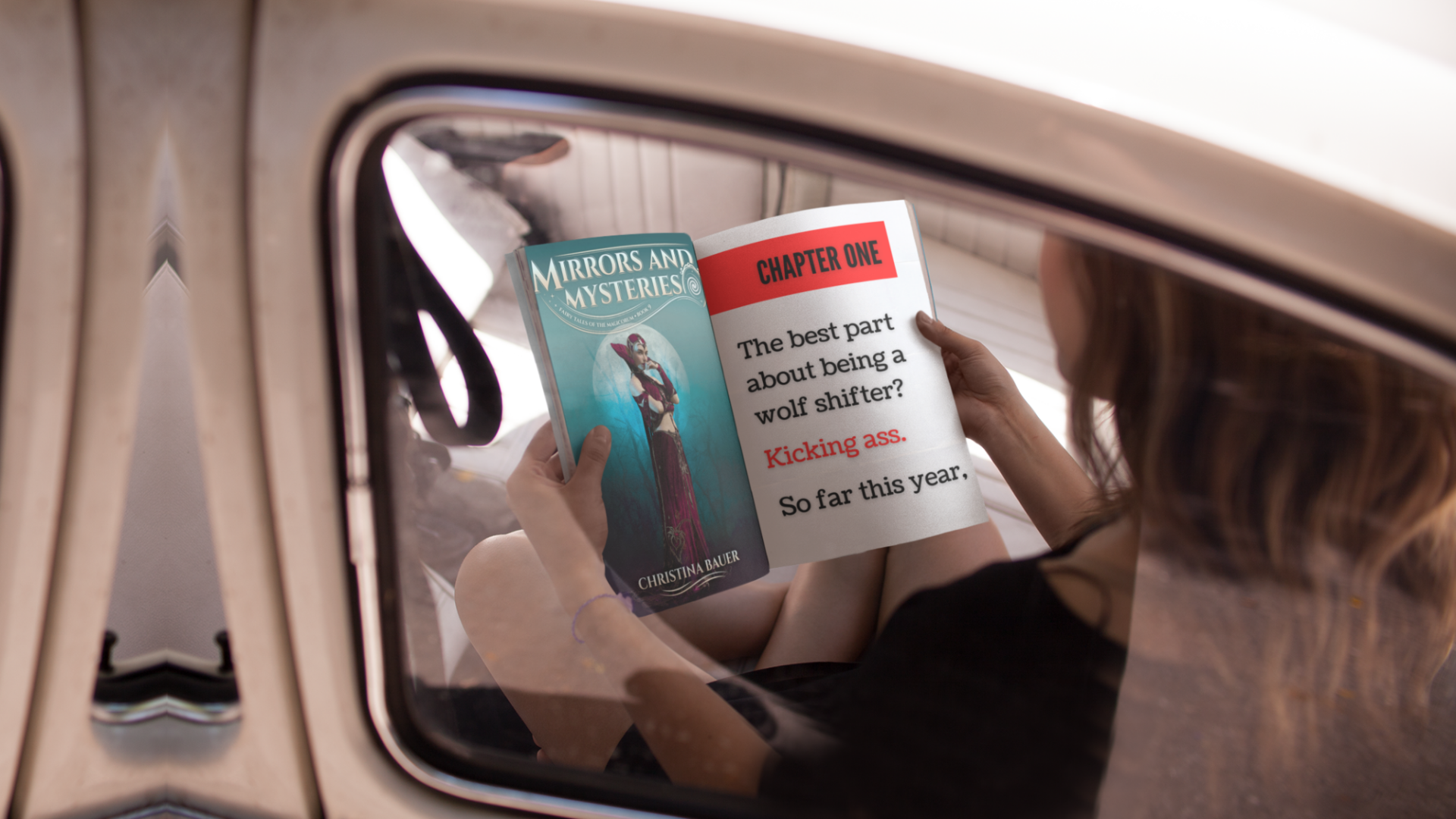 So excited to share chapter one of my upcoming book, MIRRORS AND MYSTERIES! The story begins with an expanded view of the final moments of the last book, TOWERS AND TITHES…

The best part about being a wolf shifter?

So far this year, I’ve battled boulder trolls armed with poisoned halberds… a spider queen who spits cocoons of death… and even a three-legged elf wizard whose magic gives you extra limbs (in his defense, he thinks he’s doing you a favor.) I should be dead many times over, but we wolf shifters self-heal, fast.

All of which means that although Lady R just zapped me with magical blindness, I’m not too worried. My healing powers have erased spells for ice fevers, vanished fangs, and two extra heads. All I need is a quiet spot and the Lady’s magic is history.

Question is, where am I?

After my unhappy encounter with Lady R, I returned to the Faerie Realm via a supernatural portal. Normally, magic would transport me straight home to my home, Wulfhelm.

In this case, I’m not sure where it dropped me off.

Even when I’m human in form—like I am now—my animal side is always close. Since a visual inspection isn’t an option, I reach out with wolf awareness. Leaves rustle in unseen trees. Night insects chirp nearby. A gentle breeze brushes my skin. My heart lightens.

I could be near my home. Wulfhelm.

I take a deeper breath. Beyond the scent of pine and moss, there’s the unmistakable stench of rotting greenery. Disappointment settles on my shoulders.

Still, it’s a deserted forest. That should be enough. Closing my eyes, I pull on the supernatural energy within. An electric zing spirals through my limbs. Healing power charges across my skin. A magical chill penetrates my body.

Little by little, I reopen my eyes.

Total darkness surrounds me. Still blind. This spell is proving tricky. Closing my eyes once more, I tap into an even deeper level of power. Fresh energy crackles. My veins heat. Every inch of me feels so pumped with magic, it’s as if I might explode. Firming my stance, I push through the hurt.

I open my eyes again. Blindness remains. A weight of worry settles into my bones. Much as I hate to admit it, Lady R casts a pretty mean spell.

Metallic jangles fills the air. The noise is odd and familiar, all at once. It’s a reflex to release my healing power and sense the world around me.

I know that sound. Two mirror guards are on their way.

Although I can’t see, I can picture the scene perfectly. The mirror guards are both slender and pale with high cheekbones and long blonde hair. They’ll wear thin leather armor that’s painted to look like silver. Compared to the elves, I’m muscular and broad-shouldered with rough features. My long black hair is tied back with a scrap of leather. I wear human-style clothes, namely jeans and a dark Henley.

The guards move closer. I’m ready for the worst, but I hope for the best. Out of all the Prism Master’s forces, there’s one mirror guard I trust: Captain Zoya. If I’m lucky, she’ll be on this patrol.

“Looketh over there!” calls the first guard. It’s a male voice. Not Zoya.

“An intruder doth enter our midst!” announces the second guard. This one’s a she-elf, but not the Captain.

Guess my luck isn’t changing yet. These two are typical mirror guards, which is to say, pompous idiots.

“Who disturbs my fellow guard and I?” asks the male warrior.

If my correction affects the guards, they don’t show it. “Do mine eyes regardereth the Wulfhelm Alpha?” asks the female slowly.

I can’t help it. “Regardereth isn’t a word.”

All magical beings are forced to live by a fairy tale template. As a wolf shifter, I’m fortunate not to have Red Riding Hood or the Three Little Pigs. My future follows the story of Brutus and Vita, the founders of Britain. According to legend, the pair settled the island as a bastion of safety. For me, that means protecting wolf shifter orphans in Wulfhelm.

There’s the clinking of armor followed by a whoosh. Something’s being thrown at me. Even without eyesight, I know the toss is too wide to make an impact. No need to dodge.

“Perhaps yon dog is blind,” says the male guard. “He didst not twitch when I tossed a stone.”

“Only because thy throw sucketh,” I explain.

The clink of armor grows louder as the pair steps closer. “Eureka!” That’s the female guard. “I doth detect some blinderyness in yon mongrel’s irises.”

This time, there’s no stifling. I all-out groan. “Blinderyness is not a word.”

“We’re elves,” calls the male guard. “When we say it, it becometh part of the jargon.”

“I think you mean lexicon.” I shake my head. “Look, I was raised by wolves and I know this stuff.”

“Silence!” calls the male guard. When he next speaks, it’s in a tone that he thinks I cannot hear. “Shall we attacketh him? What dost thou thinketh?”

I raise my hand. “I’d walk awayeth. Blind or not, I can defend myself quite well.”

“How did he hear you?” whispers the female.

I point to my face. “Wolf shifter.”

“Yon mongrel is bluffing,” says the male guard. “He may have cast some listening spell to hear our conversation, but none can’t fight while subject to blinderyness.”

I’m not correcting the blinderyness thing again. “Clearly, you two don’t know what I can do,” I state. “Listen to me carefully.” I wait a good five seconds to ensure they’re paying attention. “If you walk away now, there will be no trouble.”

“Don’t like to fight, eh?” asks the male guard.

Another pause follows. Perhaps they will walk away. Then, the male guard pipes up.

“Let’s clean up the filth on our lands.”

Rapunzel meets Jane Eyre in the epic conclusion of this fairy tale romance!

Grayson Eyre has left her old life behind. She’s no longer stuck serving Lady R, a sadistic Rapunzel from the Lowood clan of elves. Instead, Grayson now teaches at the Thornfield home for shifter orphans. Even better, her boss is none other than the sexy alpha, Dex. It’s all good until a mysterious witch, Jocasta, appears in a nearby tower, demanding that Dex and Grayson discover the true nature of all Rapunzels. If not, Lady R will return to claim Grayson… and Thornfield will be wiped out by the evil Prism Master. Can Dex and Grayson discover the truth in time? And what will it mean for their growing attraction?Secrets are revealed and feelings explored in this epic conclusion to the story of Dex and Grayson!