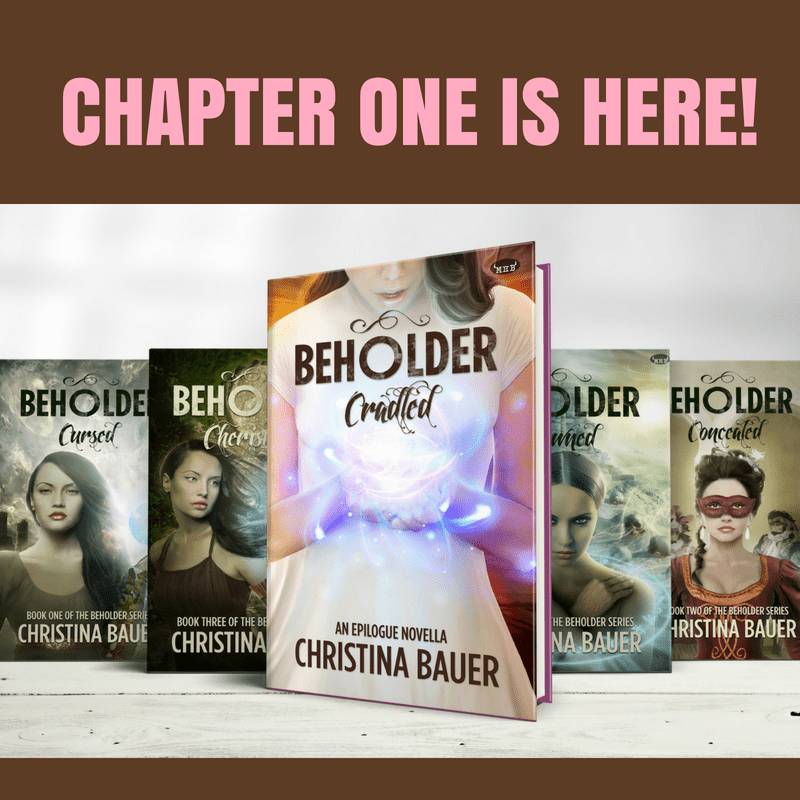 BEHOLDER Book 5 (well, novella technically) is coming later this month! Here’s a preview of Chapter One. Insert disclaimer here that I haven’t finished tweaking and proofing this sucker, but it should give you an idea of what I’m up to!

Someone was wearing out their knuckles on my bedroom door. Yanking my covers over my head, I tried blocking out the sound. It didn’t work.

I stifled a groan. Most days, I’d say this about my life: It’s good to be the queen. Sadly, today wasn’t one of those days. Last night, I’d asked the castle servants not to disturb me until dawn. Now I lay in bed, trying to rest, and yet?

Whoever it was, they weren’t giving up.

I opened my eyes a crack, finding myself alone in bed. My husband wasn’t here, but that was no surprise. Rowan knew I wanted to sleep in, so he’d slipped off a while ago. As for my bedchamber, the place looked as it always did. The red stone walls were lined with tapestries of animals being magickally brought to life by mages. My own spell books lay in neat piles on a nearby table.

Peering through the chamber’s window holes, the outside world looked dark. Definitely not morning. There could only be one explanation; the staff must have missed my orders to sleep in.

A muffled voice echoed through the closed door. “It’s long past dawn. The sun came up more than twelve hours ago.”

The speaker was Jicho, my little brother in law. “Are you toying with me?” Jicho loved his practical jokes.

“Not at all. It’s nine o’clock at night. The Fete of the Family has already started. Rowan’s been there for hours.”

Sitting up, I carefully scanned the view from my window. Sure enough, the moon peeped over the sill.

That was unexpected, not to mention concerning. Rowan’s people were Creation Casters, mages who gained magick from life. I’d been trained as a Necromancer, so my mage powers were drawn from the echoes of life in bones. Together, we’d been ruling both classes of magick users for a year now, and I’d learned one thing early on.

Rowan and I tried to attend as many celebrations as passible, and Fete of the Family was one of the biggest. Not one that I wanted to miss. After pushing off my covers, I set my bare feet on the cold marble floor. “I’ll join you soon.”

In this case, soon meant after I had a warm bath and some hot food. Caster parties lasted all night. No doubt, there was still plenty of time to join the fun.

“No, you need to hurry.” Jicho lowered his voice to a hush. “I’ve had a vision.”

My breath caught. Although he was only ten years old, Jicho was a powerful Seer who often had painfully accurate visions of the future. That said, he was also a mischievous imp. For instance, last week Jicho claimed he had a vision that the castle would implode if he had to do his lessons.

Needless to say, Jicho still finished his lessons; the castle did not implode.

I stood up, pulled on a cloak, and opened the door. Jicho stood in the outer hallway, all tanned skin, gangly limbs and knobby knees in his toga-style Seer robes. His head was shaved in the style for Seer mages. By contrast, I was tall and slender with pale skin and long dark hair.

Jicho didn’t look up as I motioned him inside. Interesting. When it came to Jicho, lack of eye contact was a classic but common sign.

“Why don’t you come in and explain about your vision?” I asked.

“Uh, no.” Jicho kicked at the floor with his sandal. “I need to get back to the party.” He kept avoiding my line of sight. That settled it.

The boy was definitely up to something.

I folded my arms over my chest. “Tell me about this vision of yours first.”

“It wasn’t exactly a vision.” Now Jicho stared at the vaulted ceiling as if the cobwebs were beyond fascinating.

A chill crawled up my neck. Not exactly a vision? That could only mean one thing. I set my fists on my hips. “Have you been playing in gateways again?”

Gateways were arches of stone that magickally connected our world to other realms. Rowan and I were unusual in that we could share our Creation Caster and Necromancer magick, combining it into hybrid power. By mixing our energies, we gave all our spells an extra boost. Hybrid magick meant that my husband and I had enough energy to open gateways. For a while, we were the only mages who could.

As the boy grew, Jicho was turning into a Seer who wielded unbelievable levels of magick. About a month ago, he figured out how to open gateways. Not good.

Jicho shot me a gap-toothed smile. “Did I open a gateway? Depends on how you define gateways.”

His big grin always made me melt a little. That said, I worked hard to keep my features stern. Playing around with gateways was serious stuff.

“Don’t try to charm your way out of this one.” I wagged my finger at him. “Answer my question. This new vision of yours—did you get it from a gateway, yes or no?”

“Yes, but only a little bit?” Jicho blinked his big green eyes at me while holding his thumb and forefinger an inch apart. He had long lashes, just like Rowan. It was getting harder not to visibly melt under his charm.

Even so, I kept up my serious stare. “You know it’s forbidden to open random gateways.” I shook my head. “You could let in any kind of monster or disease. Even worse, you could get stuck in another world and then, how would we find you?”

Jicho puffed out his lower lip. “But I only peep into the gateways; I don’t go inside them. Plus, gateways show me totally different futures than my visions do. It’s really important that I learn how to use them.”

“Well, I already saw this vision in the gateway.” His voice lowered to a hush. “Something big is coming.”

I lifted my brows. Something big? The last time Jicho used those words, he went on to predict a massive Tsunami along our southern coast. Thanks to his warning, we were able to evacuate the local population. Even so, it was an incredibly close call. If we hadn’t acted quickly to transport everyone inland, thousands would have died.

I used Jicho’s own words back at him. “Define big.”

“I’m not sure.” Jicho waved his hands around. “The vision is a little foggy. But I see warriors with strange helmets…And they’re definitely at the Fete of the Family.”

My skin prickled over with gooseflesh. Unknown warriors? Rowan and I had heard no reports of insurrection, so that left only one power with enough resources to mount an army against us. The Royals. But that was unlikely; we’d recently signed a treaty with them. In exchange for us mages providing magickal services, the Royals promised to protect us if we were ever attacked. The fact that the Royals were the only ones with enough resources to attack us wasn’t necessarily spelled out in the treaty, but we all knew why we were signing it.

So who was left to attack us with a professional army? An image of a gateway appeared in my mind. If Jicho somehow left one of those archways open, anyone could pass through and cause trouble.

Then there was the matter of my parents: two mages who’d spent eons opening and powering gateways, mostly by draining the magick inherent in their own children. Rowan and I had sent them into exile. We hadn’t heard anything from them since.

Were they the ones returning with warriors to fight us? My stomach sank. It was certainly possible.

“That does sound rather serious,” I said. “I’ll join the fete right away.”

Jicho exhaled. “Good, I’ll let Rowan know.” As the boy raced off down the hallway, his words echoed through my mind.

A weight of worry settled onto my shoulders. I may not be a Seer, but my mage senses still said that whatever was coming, it would be far worse than a Tsunami. Taking in a deep breath, I steeled my shoulders. No matter what was about to strike, I had my husband and people to fight at my side. Together, we could face down any enemy.