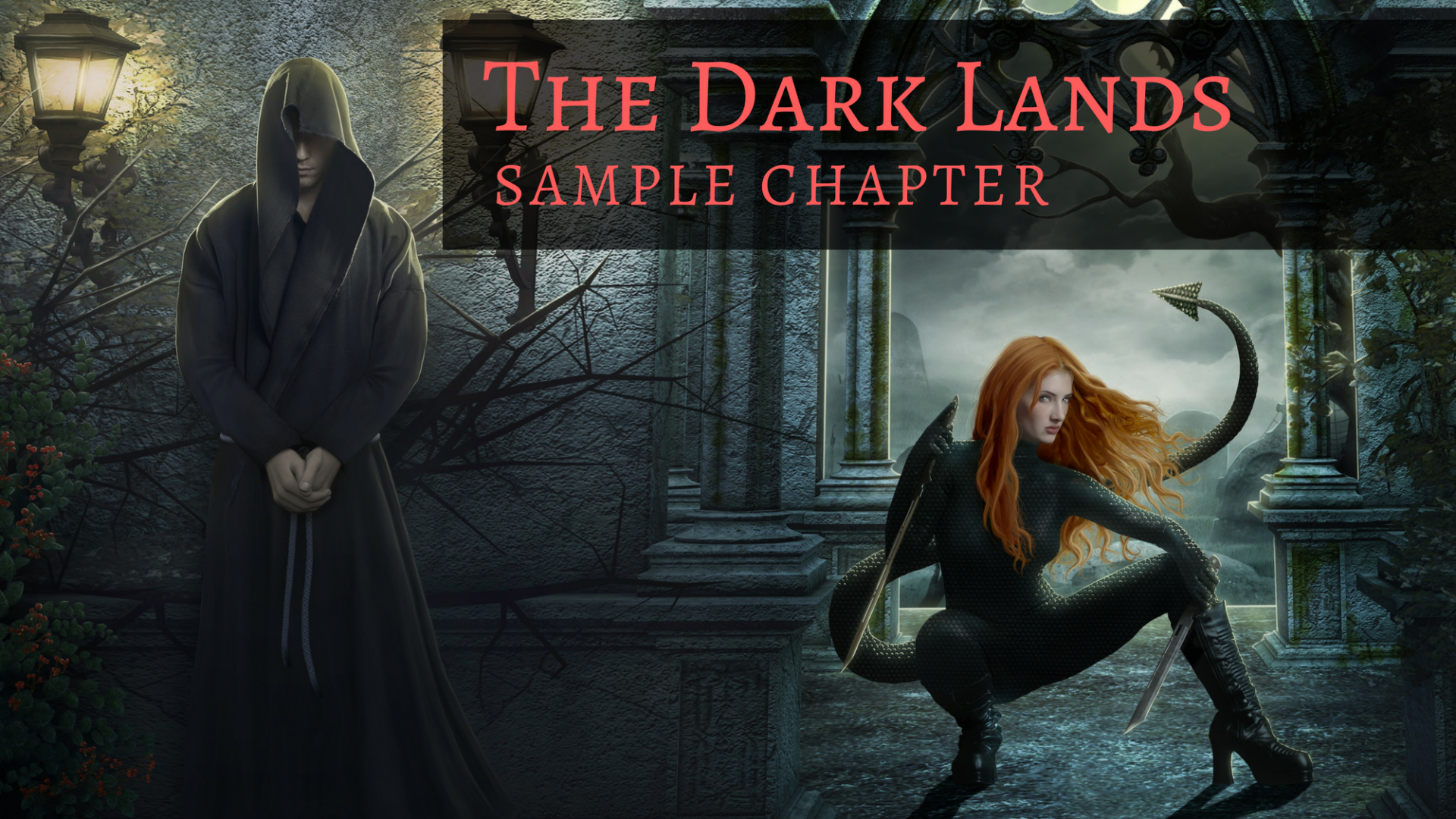 I’m super excited to share chapter one of THE DARK LANDS with you!!! For those of you familiar with my work, you may have noticed that you can’t always (or perhaps ever) tell what the books are really about from the back cover copy. For THE DARK LANDS, you know Walker is in trouble, but not much else. Well, here’s your sneak preview of all things DARK LANDS! The full title launches in late September on Amazon, Barnes & Noble, Kobo, iBooks, and GooglePlay.

A perky female voice sounds in my ear. “Great Scala, you’re on in thirty seconds.”

Blinking sleep out of my eyes, I snap up my head and look around. “What? Who? How?”

After a few seconds, I realize where I am. My husband Lincoln and I sit on the sidelines of the set for Good Morning Purgatory, the number one television show in my homeland. Our baby Maxon was up all night—and he’s now with my parents—so I’ve had zero rest. I must’ve fallen asleep on Lincoln’s shoulder. There’s even a drool spot to prove it.

The perky girl in question looks in her early twenties. She’s average height with olive skin, brown eyes, and long black hair. “I said, Great Scala, you’re on in thirty seconds.” Her gaze flicks to Lincoln. “And you too, Consort to the Great Scala.”

Lincoln nods regally. My guy is also King of the Thrax and an expert demon killer, but my people only think of him as Consort to the Great Scala. He digs it, actually. Says it’s better than getting fawned over as king.

“You know the drill?” asks the girl I’ve decided to name Perky.

I yawn. “A refresher would be great.”

“You’ll be interviewed by our new host, Becky Tizzle. She’ll ask you fun questions about your baby and that’s it. There’s no way she’ll ambush you with some surprise just so she can get an exclusive.”

“What a very specific thing for her not to do,” says Lincoln dryly.

Perky keeps right on grinning. “Great, then you’re all set. After your segment, we have on Cissy Frederickson, Purgatory’s Senator for Diplomacy.” Perky bobs on the balls of her feet. “I can’t wait to meet her. What a natural for television! Have you ever seen her face to face?”

I’d say, no she’s really my best friend, but I’ve found it’s not worth my breath. My people see Cissy as Mom’s ally in the Senate. Guess that’s the side affect of having your mother be Purgatory’s President.

“Well, I’ll leave you to it,” says Perky. “Miss Frederickson is in make-up. I’ll introduce myself. Wish me luck!” Perky steps away and as she leaves, I make note of her cat’s tail. She’s a quasi demon (part human and part demon) like me. All of us have tails and a power across one of the seven deadly sins. I’m guessing this girl’s power is pride. She really seems pumped about her job. Good for her.

A voice sounds from the set. “And now, please welcome the Great Scala and her Consort.” That would be Becky Tizzle and yes, that is her real name.

Lincoln stands and offers me his palm. “We’re on.”

I lace my fingers with his and together we enter the set. Immediately, I squint under the heavy lights. Massive cameras the size of water buffalo slowly roll across the floor, taking in me and Lincoln. For a moment, I picture how we must look to all the viewers out there in quasi land. Lincoln is tall and broad shouldered with sharp cheekbones, brown hair, and the mismatched eyes that mark him as a demon-fighting thrax. He’s wearing a black suit today, which is his Consort-look. So handsome. I’m in my form-fitting Scala robes, which are white and fall to my ankles. Other key points are my long red hair, big blue eyes, and curvy body. The viewers probably see exactly what they expect. It’s not like Lincoln and I vary our Purgatory style much.

My tail pops up over my shoulder to wave at the camera because of course it does. What a ham. I’m part Furor demon, so I have demonic powers over both lust and wrath. My tail is long, black, covered in dragonscales, and all around badass.

Lincoln and I sit in the loveseat across from Becky’s chair. For her part, Becky has short blonde hair, thick-rimmed glasses, and a peacock tail because her demonic power is pride; it’s a popular sin with people who work in television. Today Becky wears a tweed suit and a predatory smile.

Lincoln shoots a thumbs-up to the camera. Polls show quasis like it best when he sits there, looks handsome, and doesn’t say much. I thought Lincoln might be offended, but he’s turned it into a game. How long can he go without saying a word? Last interview, he got away with only saying ‘hey nonny nonny’ and that’s it. In case you’re wondering, he was answering a question about the middle ages (his people are stuck in them) and I guess ‘hey nonny nonny’ was a catchphrase back then.

“Let’s start with a few questions about your baby,” says Becky.

At the mention of the word baby, the studio audience lets out a long ooh. Everybody loves babies. I glance down at the television monitors by my feet. These things are out of camera range, but they’ve been placed so that Lincoln, Becky, and I can see the same things as the viewers at home. The picture of a cherub-like Maxon comes on the screen. My boy is all big eyes, chubby belly, and toothless smile.

“Isn’t he adorable?” asks Becky to the audience.

More oohs follow, this time with a few ahhs thrown in. More photos go streaming by. In all of them, Lincoln and Maxon look adorable. I always have something stuck in my teeth or one eye closed. Whatever magic I have, it’s not with the camera.

Even so, I settle into my loveseat and enjoy the picture show. Maybe this won’t be an ambush interview. After all, how can things go downhill after Becky leads off with baby Maxon?

The camera cuts back to the studio. Becky starts in again. “We heard your parents, the President and First Man, have set up a baby room for little Maxon.”

“That they have,” I wave at the camera. “Hi, Mom and Dad! Thanks for watching Maxon today!”

“Six months. But he’s as large and smart as a toddler.”

“You’re the Great Scala, so Maxon’s the Scala Heir, isn’t that right?”

“That is so precious,” coos Becky. She adjusts her glasses and pulls up a clipboard from beside her chair. I’ve seen that clipboard raising routine before.

“This just in,” announces Becky. “We interviewed a new victim of the vicious criminal who’s been terrorizing the after-realms. This fiend is as mean, slippery, and vicious as a snake, which is why he’s called the Viper. Roll the tape, Fred.”

On the screen by my feet, a video of an older gentleman appears. He wears a too-large suit coat with thick glasses and a fedora. “Someone snuck up on me from behind,” says the older guy slowly. “Knocked me right out. My demonic power used to be gluttony. Now, I don’t want to eat anything. Doc says I’m traumatized.”

The video of the older man vanishes. The cameras focus back on Becky.

“For months,” says Becky. “The Viper has been stealing valuables and attacking the innocent. Victims are knocked out from behind and left weakened. I’m here to ask what every quasi in Purgatory wants to know.” Becky focuses on me. “How will you stop the Viper?”

“You’re the Scala Mother to our people. The logic here is obvious.”

Two things about Becky’s last statement. One, the logic here is not obvious and two, I hate being called Scala Mother. So creepy.

“Not following you, Becky,” I say.

“Let me try this another way,” says Becky. “You are a supernatural being, right?”

Another video appears on screen. It’s the streets of downtown Purgatory City after I went into labor with Maxon. People are camped out on the asphalt with sleeping bags, candles, and signs. For days, my people blocked traffic while partaking of questionable substances. I quickly spot some of my least favorite placards.

Bring Forth The Baby

Don’t Die On Us

Becky raps on her clipboard with her knuckles. “Your followers held a vigil, asking you to have a healthy baby and not die. And that’s exactly what you did, isn’t it? That was a supernatural response to a quasi request. How is that different from what I just asked regarding the Viper?”

I shrug. “Having a baby is more of a natural woman thing, rather than any special powers related to magical crime solving.”

“Oh, I’d say having a baby is magical.” Becky raps on her clipboard again.

Lincoln leans forward, resting his elbows on his knees. I know that pose. My guy is getting in the game. Yes.

“You’re leading up to something.” As he speaks, Lincoln’s voice turns low and packed with menace. “What have you found?”

“New information has come to my attention.” Becky holds up her clipboard. “The Viper has somehow broken into the supernatural prison of none other than Lucifer.” The studio audience gasps. “Once there, the Viper poisoned one of the guards. It won’t be long before Lucifer escapes. Isn’t that right?”

Lincoln and I share a confused look. “The Great Scala and I have received no such information. Are you certain it’s valid?”

“We received this data from a ghoul named WKR-7,” explains Becky. “He’s supposed to be very reliable.”

“Walker?” It’s an effort not to screech the name. “You got this intel from Walker?”

“Why yes,” answers Becky. “Have you heard of him?”

“Then you know this information is valid and the threat is real. Need I remind you why Lucifer was jailed? Roll it, Fred.”

Again, fresh video shows on the screen. This time, angels in silver armor fly across a gray sky, their swords held high. These warriors swoop and dive over a retreating crowd of ghouls, quasis, and humans. Angels ruthlessly cut down the innocents. Blood is everywhere. Text at the bottom of the screen says ‘re-enacted history’ but that won’t matter to most. The facts are true, even if the footage is faked up. Lucifer was a bloodthirsty maniac.

The video switches to show one angel close up. He has golden everything: hair, armor, and wings. Lucifer. He paces before a line of fresh angelic troops.

“My Brimstone Legion,” declares Lucifer. “All was peaceful in the universe until the Almighty created ghouls, quasis, and humans. Then we were asked to help these lesser beings. I won’t have it! Non-angelic life is worthless. Now take to the skies and destroy what should never have been created.” The angels unfold their wings and rise up into the air. The video ends; the feed returns to the studio.

Becky rounds on me. “Now, what do you say? How will you save us when the Viper releases Lucifer?”

I have no idea what to say, but I do know what to think.